Ahead of speaking at Bloomfield Presbyterian Church tomorrow morning (11.00 am) we’re reposting the video we made at Danja last year, for the benefit of a couple of people who didn’t get the chance to see it yet. If you’re in Belfast and can escape the snow (!) why not come down and join us?

After a muddled few weeks we’ve managed to sort ourselves out! Here’s some events we’ve been invited to speak at over the next few weeks. We’d love to tell you all about our time away, and show you some pictures and video!

*Please note the corrections from the post published earlier.*

Sorry for the late notice everyone: due to bereavement we’ve had to cancel today’s talks in Bloomfield and Killowen. Please pass on the news to anyone you know who might have been planning to make a trip. We’ll try and see about rearrangements, if possible, and let you know.

Dates for the Diary

Just a quick post to share some public invitations we’ve had to talk a bit about our time away!

This Sunday, 27th January we’ll be speaking at two churches: at Bloomfield Presbyterian Church (East Belfast) in their special Lifebuilders session after the 11am service (a half-hour seminar, really); and at Killowen Parish Church (Coleraine) at the 6pm service.

Next month, on Sunday 24th February, we’ve been invited back to First Presbyterian Church, Cookstown to share at their 7pm service.

It’s been really interesting as we prepare to talk in detail about our life and work last year. We had a really nice time visiting a SIM prayer group in South Belfast on Monday night (in the midst of all that snow!) and unpack some of our thoughts. Hopefully, we made some kind of sense! There’s a lot of information to pack in. We’re very much looking forward to diving in and telling more stories this weekend – maybe we’ll see you then!

Back in Northern Ireland, that is.

Firstly, an apology for a comparatively quiet December. After striving to blog weekly all year long, life overtook us in the last couple of weeks at Danja.

Amongst other events was the leaving party for Drs Mark & Ruth. A large number of people gathered to eat, dance and listen. 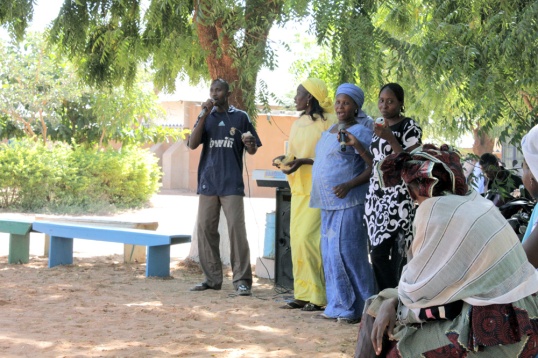 It’s not a Danja party without the Danja band!

Many of the hospital staff. Some were presented with awards to mark three years of attendance at weekly training sessions.

That weekend, we found that the headaches Peter had been suffering were actually symptoms of malaria, so he had a couple of days in bed after that! Our last week at Danja was a blur of finishing up and spending time with people. We had a particularly sad moment when we said goodbye to our house helpers on the Monday morning as we left – two ladies who we had seen and spent a lot of time with this year.

Our final few days in Niger were split, as we opted to stop at Galmi on the way through for a few days. It was great to see many friends, eat and spend time with them again. We’ve felt very blessed to have been able to take time and return to Galmi several times through the year for R&R. After that, we were able to spend three days in Niamey before our final departure for home.

After a long day’s travel, we arrived back in Belfast in time for Christmas! It was a wonderful time to return as the holidays meant that so many of our friends and family were off work and available to visit. The last couple of weeks have been a combination of visits, job applications and interviews. We’re not quite sure what or where the future holds, but we’re trusting in God’s provision.

In February (and probably March) we plan to try and visit more of the churches and groups who supported us this year. We’ve already been able to informally drop in on a few different groups. On Sunday 27th January (at 6pm) we will be speaking at the evening service in Killowen Parish Church, up in Coleraine. We’ll be cracking out some pictures and video, and sharing a bit about what God has shown us over the last twelve months. Please come along if you can.

Notice about other opportunities to hear about our time away will appear here on the blog. However, its otherwise time to draw down the curtains on our blogging adventures in Niger! Thank you so much to everyone who has supported and followed our work in 2012. We look forward to meeting and seeing so many of you now in 2013!

Saturday was graduation day at nearby Dogon Gao Bible School, which sits on one corner of the Danja site. Dogon Gao is run by SIM’s partner church EERN, and we have quite a lot of interaction for various reasons.

Anyway, the invitation was extended to attend graduation day, where seven graduates were celebrating completing the four-year course. It’s a big occasion, and the representatives from many different churches across the region made the journey to take part. 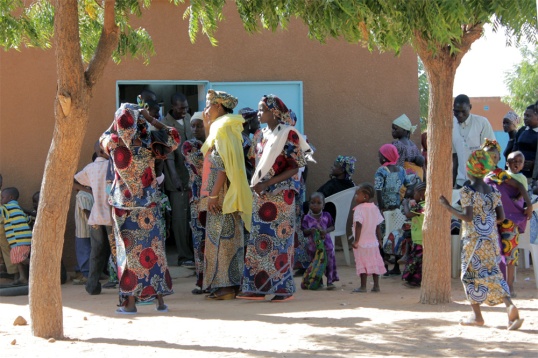 The choir get ready outside the church.

The band from the church in Danja village came to add to the celebrations.

The graduates danced in wearing specially made uniforms.

Just about every pastor in attendance got up to say something!

As is the way with these things, just about every pastor in attendance had a chance to say something, so the service went on for a while! It was a great chance to share in the celebrations though. Many of the graduating class are familiar to us as they live at Dogon Gao, and often would help out with work needing done around Danja – one man replaced all the bug screens on our windows a while back! There was a fun morning a couple of months ago where they all came over to the compound for lunch too.

Hopefully several of these guys will go on to work as evangelists in one of the major denominations. Some might work for a few years before going on for advanced training.

Each Sunday evening, we have an informal church gathering. Depending on who is here, the size has bounced around a lot this year. Once a month we have a joint service with the folk from Maradi and Maza Tsaye compounds, and during the summer there must have been well over 50 bodies in the room. We’re also regularly joined by folk from other missions working nearby.

Over the past couple of weeks we’ve been very thin on the ground out at Danja, so it was good to travel in to Maradi last Sunday for a joint meeting. Someone had asked what our Sunday evenings look like. I’m not sure they meant literally, but here’s a picture nonetheless!

It’s been a really interesting and varied moment each week; we take it in turns to lead the meetings, so there’s been a range of styles of topics. Some of the best are those where the speaker shares from experience or stories they’ve seen or heard. With such a wide range of people from across the globe serving here, we’ve had a lot of different, inspiring and thought-provoking times together this year.

Posted in Field Notes and tagged church | Leave a comment

As we hurtle towards the end of the year, there remain a couple of video projects Peter hopes to complete before our time in Niger ends. One of those is a profile of the new conference center at Maza Tsaye in Maradi.

Part of that project involves ongoing work to erect a new wall, marking out the boundary of the site. When the original farm school was founded at Maza Tsaye, it was well out of the town boundaries. But the intervening years have seen the city envelop it on all sides, so the wall should help protect the multiple projects and research farms based across the site.

Every week, the construction crew and site workers have been meeting to hang out, snack and share. So it was the perfect time to turn up and get some footage of the ongoing work. 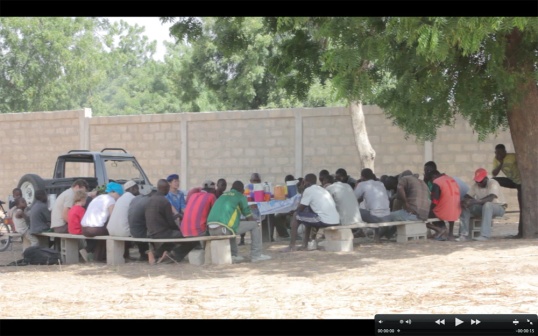 Workers gather in the shade for morning tea. 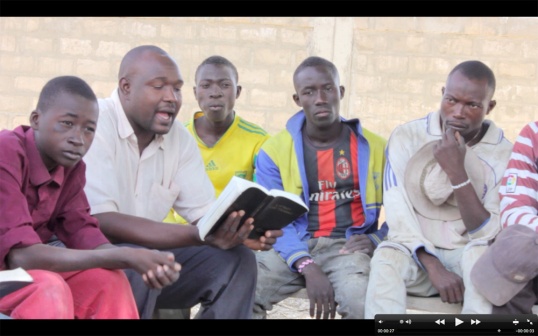 A. reads during a short Bible study.

Once we were finished, it was straight back to work. The wall building team have been working at a furious pace over the past few weeks, and are already half way along the 400m stretch of wall that is currently under construction.

A brand new stretch of wall. 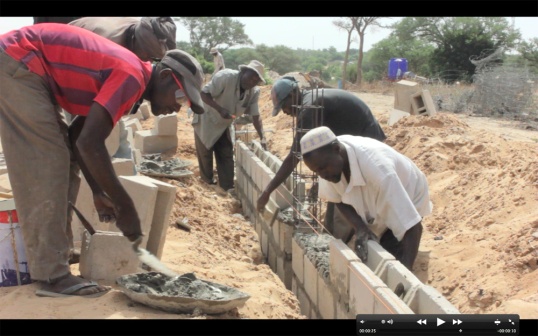 Hard at work in the late morning sun.

Another project happening out at Maza Tsaye is the planned construction of a new school at the front of the property. The vision is to build blocks for all age groups, starting with the youngest in the new year.

The site of the new school.

A crowd of us were out at Lake Madarounfa this evening… well, we didn’t make it that far due to some of the area still being boggy after rainy season. The main river bed, on the other hand, has definitely dried up again… leaving the so-called ruined ‘bridge to nowhere’ marooned once more. 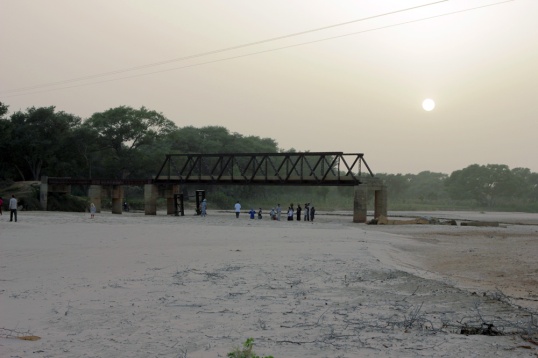 A bumper collection of handmade bandages and woolly hats (yes, even in Niger, come cold season babies really need woolly hats!) arrived with one of our friends this week.

Rumours of some kind of Coleraine-based workhouse packed with exhausted church-goers, their hands shaking from the furious click-clack of their knitting needles, remain unfounded.

Just some of the handmade supplies.

Seriously though, we have to pass on the sincere thanks of the hospital staff here, never mind the many patients who will benefit from your work and generosity. Thank you again!